Why Sing In the Richmond Symphony Chorus? 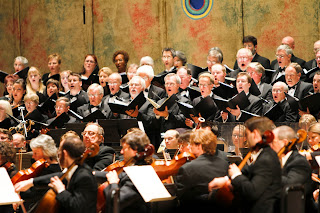 "Why do I sing with the Symphony Chorus?  At least two reasons.  First, because I love to wrassle.  Emily Dickinson, in a poem set by Elliott Carter that we’ve sung with the Symphony, wrote that “Musicians wrestle everywhere.”  I know that’s true here in Richmond; the Chorus is in the Rhythm Hall most Tuesday evenings, grappling with music for upcoming concerts.  We are privileged, highly, to learn, polish and perfect compositions that are well-worth the struggle, pieces that repay the hard work many times over.  The Richmond Symphony Chorus—a great wrestling squad.

Second, we get absolutely the greatest seats in the house.  The Chorus is perched back there over the players’ shoulders, and we see up-close the effort, the physicality, and the tremendous skill that they devote to bringing music from the score, right there, in the moment.  And yet quiet moments are some of my most favorite.  For many concerts over the past two decades, I’ve sat just behind Jim Jacobson, our superlative timpanist.  He commands the most room-shaking instrument, but I love to watch him work during passages when the kettledrums aren’t called upon at all.  Timpani must be frequently retuned; the temperature and humidity in the room—the insistent breathing of all those darn singers—are critical and ever-changing factors to which Jim must react.  Watch closely, and you’ll see him, bent low over a drum, cheek nearly grazing the surface, tapping the drumhead ever so lightly with his fingertips, listening and tuning, listening and tuning.  The contrast between those watchmaker-fine adjustments and the bomb-burst explosions that follow continues to delight me."    ~Andrew J. Dolson, Bass 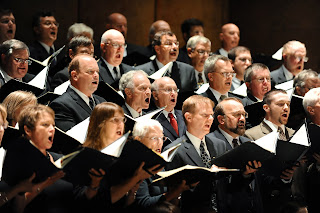 "The joy of singing with the Richmond Symphony Chorus centers around the talented singers and our conductor. It's stirring to hear the other sections polish up their parts in rehearsal.  It adds incentive to one's own preparation.  Erin's deep understanding of Beethoven's Missa brings great excellence to the process of preparing it.  She is helping us merge our goals with those of the composer.  It's humbling to be in the presence of such genius, both now and from the 19th Century."    ~Bob Blinn, Tenor

Hear the Richmond Symphony Chorus at the Carpenter Theatre in the last concert of the 2010-11 season sing Beethoven's Missa Solemnis on Saturday, May 21 at 8PM or Sunday, May 22 at 3PM.
Posted by RSO All Access at 3:48 PM

Want More of the Arts?